Wokingham published the Local Plan Update ‘Homes for the Future’ in November 2018. This included a number of proposed development sites in Sonning, which the Parish Council wish to bring to your attention. Below is a list of the proposed sites and a brief description. SPC objected to these in November 2016 but they are now up for public consultation. If you would like to protect Sonning from the proposed developments the Parish Council would urge you to respond to the consultation, deadline 22 February 2019.

During January and early February WBC are holding public events at seven locations. The plans will be on display and your questions can be answered. The briefings are held between 7pm and 9pm and the two local to us are:

Your Parish Council has already objected to development on all of the proposed sites, primarily because the areas are unsuitable for housing development and will destroy the iyllic, peaceful, rural and verdant character of the Conservation Area as well as the effect that increased traffic will have on our already over-congested streets. (You can read the full details of our objections below.)

The documents from WBC describing the Local Plan are as follows:

We would strongly urge you to register your objections by doing one of the following:

The reasons for your Council objecting to these development proposals are detailed below, click on the banner to see our responses.

All of the above apply to this site. Whilst understanding that this area may be used to extend the existing local authority low cost housing in 2025 the access is the main obstacle. The site is also adjoins the Conservation Area.

All of the above comments apply to this site and, potentially, would be the most damaging to Sonning. This 6.16 hectares site immediately adjoins the existing residential area of Glebe Lane and Little Glebe (together with Glebe Gardens) and if developed, vehicles from the development would almost certainly use the existing narrow residential roads as a rat run to Sonning Bridge. Little Glebe has a high proportion of elderly and disabled residents many of them WBC tenants. Additionally the Sonning Primary School in Pound Lane is virtually opposite the access to Little Glebe and due to the limited onsite parking at the school, parents use Little Glebe as a parking area. This is particularly bad twice a day at school open and closing times. During these times Little Glebe is reduced to one lane traffic making it difficult, and dangerous, for both pedestrians and drivers alike. Site 5S0002 also adjoins one of the important archaeological areas in Sonning, which is Scheduled Ancient Monument 100960 “Cropmark complex south of Charvil Lane”. This scheduled area encompasses an extensive set of cropmarks indicating a possible prehistoric or Roman settlement activity, comprising a trackway, field system, ring ditches, and pits.

All of the above comments apply to this site. Additionally this site is within the Sonning Conservation Area and (as defined in section 60 (1) (a) of the Listed Buildings and Conservation Area Act 1990) is ‘an area of special architectural or historic interest, the character or appearance of which it is desirable to preserve or enhance’. This also means that a local authority can exercise stronger control over the development of the location so that its special character can be preserved and enhanced. This proposal can in no way preserve, enhance or protect the special character of the Conservation Area and it would impact of the setting of the Conservation Area. It would completely destroy the idyllic, peaceful, rural, verdant character of the area. The site also acts as part of an important green wedge which prevents urban sprawl and makes a significant contribution to the separation of Sonning and Charvil..

The site has poor vehicular access via an un-adopted road and any new access road would increase pressure onto the already stressed B478, Charvil Lane which is used as a major route and has traffic congestions seven days a week. Local roads are already over capacity, particularly during the morning and evening busy periods and also over the weekend. Charvil Lane is a narrow, two lane, country lane with established ancient, protected hedgerows and well established trees along it entire length. Charvil Lane was never intended to take such large numbers of vehicles and developing this site would increase this already unacceptable pressure and severe bottlenecks.

All of the above apply to this site. The site is in the countryside and housing would represent an urban form of development, resulting in the loss of open countryside and reduce the separation between settlements (Sonning and Charvil). The site has poor vehicular access via an un-adopted road and any new access road to such a large area of development would increase pressure onto a busy junction onto the A4.

The area is very rural in outlook and the identified land is currently farmland. The existing ribbon of low density housing on the Charvil side of Milestone Avenue is of detached individual properties, set in their own plots with long rear gardens backing on to equally long gardens to property in St. Patrick’s Avenue. The plots contain many existing trees and leafy vegetation providing an exceptionally high degree of screening and privacy. The proposed site is the largest, at 8.81 hectares, being proposed for Sonning and it must be assumed that if allowed the site would be of a greater density to that on the Charvil side of Milestone Avenue. This would completely destroy the existing rural street scene and the currently enjoyed by the Charvil residents. Milestone Avenue is also a well-used footpath for walkers wishing to access St. Patrick’s Stream, a tributary of the River Loddon and the River Thames.

Unfortunately a recent planning appeal allowed outline permission for 13 dwellings on this site. This followed refusal by Wokingham Borough Council as unacceptable in principle and conflicting with the requirements of NPPF, Core Strategy Policies CP3 (General Principles for Development,) CP!! (Proposals Outside Development Limits-including Countryside) and MDD policies CC01 (Presumption in Favour of Sustainable Development) and CC02 (Development Limits). Wokingham BC had also stated that, due to the location, the proposed housing development, failed to demonstrate that the development would be sustainable with regards to its location and access to services and public transport and employment opportunities. The Parish Council regarded the proposed, additional housing in the area as having a high dependency on the use of private cars, contrary to the sustainable transport goals of the NPPF and policies CP1 and CP6 of the Core strategy.

The Council understands that this site has been removed from the consultation list. However, for clarity, the Council wishes to repeat its earlier objections.

The site is waterlogged at certain times of the year due to its structure and is identified as Reading Beds. Reading Beds are a mixture of sand with pockets of clay which hold the surface water making it difficult to drain. The water table is therefore very high in the area due to the various water courses that are a feature of this part of Sonning.

This site is totally unsuitable for the proposed use. The site is within the Sonning Conservation Area, and the proposal can in no way preserve, enhance or protect the special character of the Conservation Area. The proposal would completely destroy the idyllic, peaceful, rural, verdant character of the area, which is an important open public space, well maintained and used by residents and visitors alike.

Due to the waterlogged nature of the area it is unsuitable for the proposed purpose, which would require large areas of hard-standing to accommodate the various caravans, heavy vehicles associated with the proposed lifestyle and business activities of the proposed occupants.

The area is also a designated Local Nature Reserve recognised as the Ali’s Pond Local Nature Reserve. This was established by Sonning Parish Council. Since then, various activities have been implemented under the supervision of Prof. A Driver, to enhance the area and increase community involvement in its management and use, including pond creation, hedgerow and tree planting, wildflower planting, bird and bat box installation and erection of information boards. Breeding Great Crested Newts were discovered during the summer of 2000, and the Parish Council, with Wokingham District Council support, authorised village resident, Alastair Driver, to apply to English Nature for Local Nature Reserve status for the site. And the site was officially declared Ali’s Pond LNR in April 2001. Sonning Parish Council is only the third parish council in the country to declare an LNR. The nature area has been created and managed for the use and enjoyment of all sections of the local community, as well as for visitors to the village. Key England Biodiversity Strategy priority species which have colonized the site so far include Great-crested Newt, Stag Beetle, Song Thrush and Pipistrelle Bat, 18 species of dragonfly, 250 species of larger moth and over 40 species of aquatic/wetland plants have been recorded at the site since its 1997.The field immediately to the south and west of Ali’s Pond LNR was purchased by Reading Blue Coat School in 2006. In 2007, as a condition of the planning application to change the land use designation of that field from agriculture to sport, another nature area was created within it to provide additional habitat for Great Crested Newts. It is known as Sonning Field, with another amphibian breeding pond, new hedgerows with a wide variety of native trees and shrubs. A permissive path enables easy access through from Ali’s Pond and across Sonning Field to a kissing gate on Sonning Lane.

The site is well used by the public and the local schools (Sonning Primary School and Reading Blue Coat School) which are adjacent to the site, and use it for educational purposes.

Sonning is already subject to massive traffic jams and poor air quality. The proposed use would be out of keeping with the location and access would be onto Sonning Lane, which is very narrow and only has a substandard footway on the west side. Sonning Lane is the main parking area in the village and parked cars further reduces the width with limited passing places. The proposed use, due to the nature and occupation of the proposed occupants, would increase the use of heavy vehicles onto this narrow lane and would increase the levels of traffic in Sonning putting additional pressure on the existing, poor, infrastructure.

All of the above apply to this site. The site was recently dismissed at appeal and there Enforcement is currently underway. The site is unsustainable, located as it is, outside of the development limits and is within the countryside. The proposed use would have an urbanising effect on the area which is essentially rural in nature and would result in the loss of an area of open countryside. It would erode the green buffer between Sonning and Charvil. The site has not been identified for development and the proposal would fail to protect the separate identity of settlements and would have unacceptable harm on the visual amenity and the character of the countryside. No special justification exists that would outweigh the harm identified. The proposed use would be contrary to policies CP1, CP2, CP6 and CP11 and policy TB10 of the managing Development Delivery Local Plan Document (2014) and Borough Design Guide (2012). The site and surrounding area is a pleasing mix of woodland, native hedgerows and trees. The proposed use would add to noise, air pollution and additional traffic in the area.

The site has no existing drainage.

The proposal is contrary to CP2-Inclusive Communities, as it does not comply with the criteria requiring that: i) the site is located either within or close to the development limits of a settlement in policy CP9 in order to maximise the possibilities for social inclusion and sustainable patterns of living.

The Proposed Development Sites in Sonning

Click on the map to go to the interactive version provided by Wokingham Borough Council. 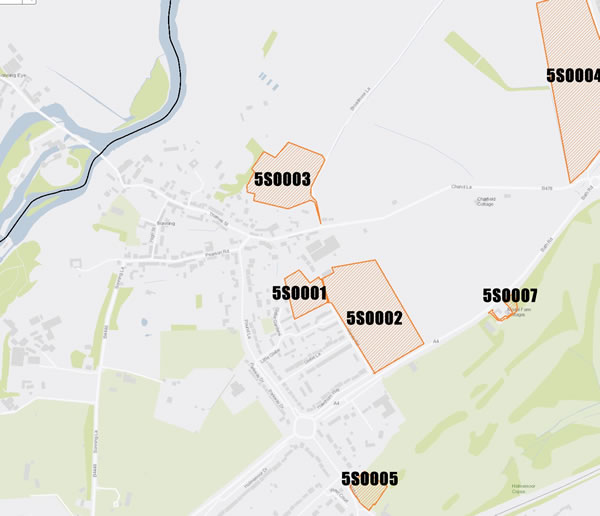